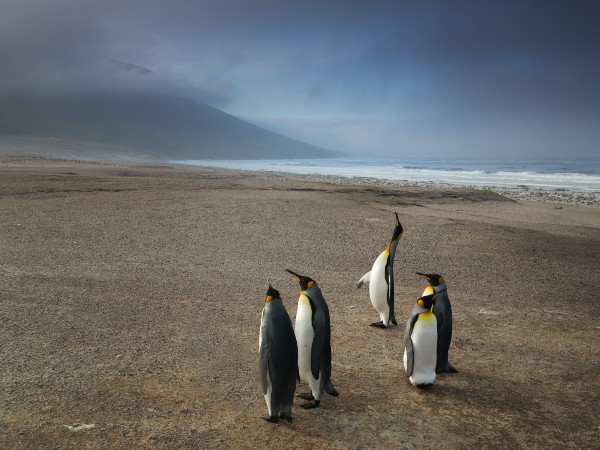 Surrounded by their 200 satellite islands, the twin bulwarks of East and Falkland stand athwart the sea lane to capeGorn, some 450 km (300 mi) east of the South American coast. The group was the subject of desultory squabbling between Britain, Spain, France and Argentina for 200 years before Britain realized their preference for British rule ever since, most recently by repelling an Argentine invasion in 1982.

When the dust settled, the Falklands War proved to have revived global interest in the whole group as an untouched wildlife paradise with enough amenities to make it accessible. The total population is minimal but visitors can find hospitality even in the most remote areas.

The main islands are vast, low yellow and green tundra, ridged by hills that rise to 705 m (2,313 ft( at Mt Usborne on East Falkland, Craigs and broken rockfaces loom over swamps like Lafonia on East Falkland, where peat-stained tarns and wind-rippled lakes reflect endless 2 m (6ft 6 in) high tussac grass and huge skies, home to 600,000 sheep.

Fishermen go for sea trout or mullet at Warrah in West Falkland or San Carlos or Murrel in East Falkland. The fishing season (September to March) brings five species of Penguin to the islands, including rockhoppers, macaronies and Magellanic (aka ‘jackass’). Sea Lion Island has resident king penguins, offshore killer whales, fur and elephant seals and dolphins as well as sea lions.

The Falklands also host the world’s largest colonies of the majestic, black-browed albatross, along with giant petrels and 200 other bird species.

The recent war has left its mark on the Falklands – most impressively, on the islanders’ determination to show that their greatest asset, nature, has no politics.

November to Febraury for bird-watching. December/January and March/April for fresh-run sea trout.

By air, from Santiago, Chile, via Punta Arenas and Rio Gallegos, Argentina; or from the UK on regular Ministry of Defence flights from RAF Brize Norton or by cruise ship.

In Stanley, a local delicacy is ‘diddle dee jam’ – a unique preserve made from the tiny red berried of a Falklands shrub.