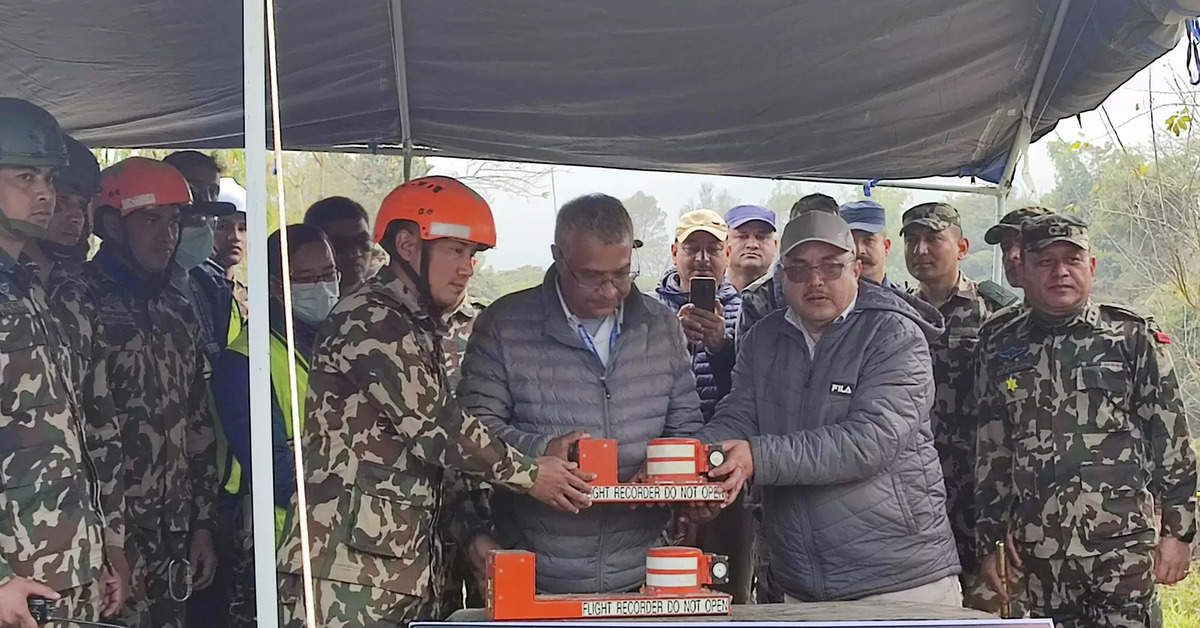 A spokesman for Nepal’s Civil Aviation Authority says a flight data recorder and a cockpit voice recorder have been retrieved from the site of the crash of a passenger plane that went down on approach to a newly opened airport in the tourist town of Pokhara, killing at least 68 of the 72 people aboard. The dead, many of whom were returning home, include a pharmaceutical marketing agent who was coming to be with his sister as she gave birth, and a minister of a Korean religious group who was traveling to the school he founded.

On Monday evening, relatives and friends were still gathered outside a local hospital. Many consoled each other, while some shouted at officials to speed up the post mortems so they could take the bodies of their loved ones home for funerals.

It’s still not clear what caused the crash, which took place less than a minute’s flight from the plane’s destination, on a mild day amid calm winds.

Nepal’s Civil Aviation Authority said the aircraft last made contact with the airport from near Seti Gorge at 10:50 am before crashing.

A witness who recorded footage of the plane’s descent said it looked like a normal landing until the plane suddenly veered to the left. “I saw that and I was shocked… I thought that today everything will be finished here after it crashes, I will also be dead,” said Diwas Bohora. After it crashed, red flames erupted and the ground shook violently, like an earthquake, Bohora said. “I was scared. Seeing that scene, I was scared.”

Amit Singh, an experienced pilot and founder of India’s Flight Safety Foundation, said Bohora’s video appears to show a stall, a situation in which a plane loses lift, especially likely at low airspeeds.

The twin-engine ATR 72 aircraft, operated by Nepal’s Yeti Airlines, was completing the 27-minute flight from the capital, Kathmandu, to Pokhara, 200 kilometers (125 miles) west. It was carrying 68 passengers, including 15 foreign nationals, as well as four crew members, Nepal’s Civil Aviation Authority said in a statement. The foreigners included five Indians, four Russians, two South Koreans, and one each from Ireland, Australia, Argentina and France.

Jagannath Niraula said the flight recorders were found on Monday, and will be handed over to investigators. Rescuers are still searching the debris, which is scattered down a 300-meter (984 feet) gorge. Pemba Sherpa, spokesperson for Yeti Airlines, confirmed that both the flight data and the cockpit voice recorders have been found.

A pilot who routinely flies an ATR 72-500 plane from India to Nepal said the region’s topography, with its mountain peaks and narrow valleys, raises the risk of accidents and sometimes requires pilots to fly by sight rather than relying on instruments. The pilot, who works for a private Indian airline and didn’t want to be named due to company policy, called the ATR 72-500 an “unforgiving aircraft” if the pilot isn’t highly skilled and familiar with the region’s terrain and wind speeds.

Hundreds of rescue workers were scouring the hillside where the Yeti Airlines flight, carrying 72 people from the capital Kathmandu, went down. The weather was clear, said Jagannath Niroula, spokesman for Nepal’s Civil Aviation Authority. There were five Indians, four Russians, one Irish, two South Korean, one Australian, one French and one Argentinian national onboard.

Hundreds of people gathered outside the Pokhara Academy of Health and Science, Western Hospital, where the bodies are being kept. Bimala Bhenderi was waiting outside the post-mortem room Monday. She was planning to meet her friend, Tribhuban Paudel, on Tuesday when she heard that his flight had crashed. “I’m so sad, I can’t believe it still,” she said in tears.

Bikash Jaiswal said he could only identify his wife’s brother only by the ring he wore, and that he had yet to tell his wife, who was giving birth Sunday. Sanjay Jaiswal, who worked as a marketing agent for a private pharmaceutical company in Kathmandu, was flying to Pokhara for the birth. More than 24 hours after the crash, Sanjay’s body lay in the same hospital where his niece was just born.

“He was a hardworking person, and now there’s no one left in his family to earn,” Bikash said.

Park Dae-seong, a minister and spokesperson of the Won Buddhist order, said Monday it confirmed the deaths of Arun Paudel and his daughter, Prasiddi. Arun Paudel, 47, had worked as a police officer in Nepal before being introduced into the religion by his brother. He studied the religion for years at a South Korean university before becoming a minister in 2009. He then returned to Nepal and established a school in the Lumbini province in 2013 where children received English, Korean and information technology education. Park said Paudel was returning to Nepal for work related to the school, called the Vishow Ekata Academy.

The Civil Aviation Authority said that 38 people have been identified. Gyan Khadka, a police spokesperson in the district, said the bodies will be handed over to family after officials finish post mortem reports.

The Russian Ambassador to Nepal, Alexei Novikov, confirmed the death of four Russian citizens who were on board the plane. South Korea’s Foreign Ministry said in a statement that it’s still trying to confirm the fate of two South Korean passengers and has sent staff to the scene.

Omar Gutierrez, governor of Argentina’s Neuquen province, wrote on his official Twitter account that an Argentine passenger on the flight was Jannet Palavecino, from his province.

The Facebook page of Palavecino says she was manager of the Hotel Suizo in Neuquen city. She described herself as a lover of travel and adventure tourism.

Australian Treasurer Jim Chalmers told reporters Monday that “our hearts go out to all of the families of the crew and passengers” who died, adding that the government was providing consular support to the family of an Australian who was aboard the plane.

The type of plane involved, the ATR 72, has been used by airlines around the world for short regional flights since the late 1980s. In Taiwan, two accidents involving ATR 72-500 and ATR 72-600 aircrafts in 2014 and 2015 led to the planes being grounded for a period.

ATR identified the plane involved in Sunday’s crash as an ATR 72-500 in a tweet. According to plane tracking data from flightradar24.com, the aircraft was 15 years old and “equipped with an old transponder with unreliable data.“ It was previously flown by India’s Kingfisher Airlines and Thailand’s Nok Air before Yeti took it over in 2019, according to records on Airfleets.net. ATR has not responded to a request for comment.

Nepal, home to eight of the world’s 14 highest mountains including Mount Everest, has a history of air crashes. Sunday’s crash is Nepal’s deadliest since 1992, when all 167 people aboard a Pakistan International Airlines plane were killed when it plowed into a hill as it tried to land in Kathmandu.

According to the Flight Safety Foundation’s Aviation Safety database, there have been 42 fatal plane crashes in Nepal since 1946.

The European Union has banned airlines from Nepal from flying into the 27-nation bloc since 2013, citing weak safety standards. In 2017, the International Civil Aviation Organization cited improvements in Nepal’s aviation sector, but the EU continues to demand administrative reforms.