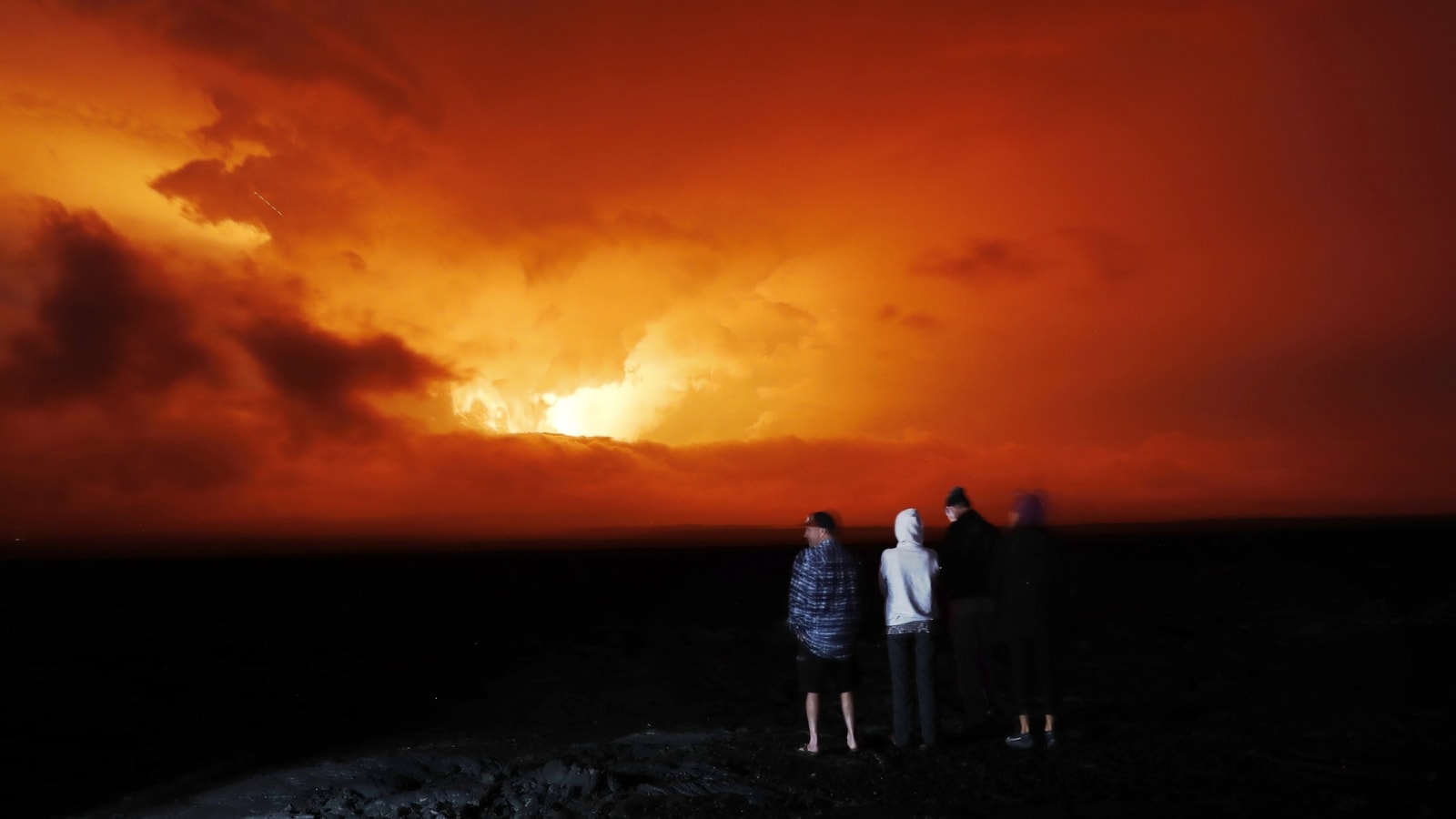 Rate this post
Lava is shooting 100 feet to 200 feet (30 to 60 meters) into the air as Hawaii’s Mauna Loa, the world’s largest active volcano, erupts for the first time in nearly 40 years.

For now, lava is not threatening any homes or communities and no evacuation orders have been issued. Lava could eventually reach neighborhoods as it flows downhill though it could take a week or more for molten rock to reach populated areas.

Mauna Loa is spewing sulfur dioxide and other volcanic gases. They form volcanic smog, or vog, when they mix with vapor, oxygen and dust in sunlight. As a result, state health officials are urging people to cut back on outdoor exercise and other activities that cause heavy breathing.

Mauna Loa last erupted in 1984. Its smaller, more active neighbor, Kilauea volcano, has been erupting continuously for more than a year since September 2021.

WHERE IS MAUNA LOA?

Mauna Loa is one of five volcanoes that together make up the Big Island of Hawaii, which is the southernmost island in the Hawaiian archipelago. It’s not the tallest (that title goes to Mauna Kea) but it’s the largest and makes up about half of the island’s land mass.

It sits immediately north of Kilauea volcano, which is well-known for a 2018 eruption that destroyed 700 homes and sent rivers of lava spreading across farms and into the ocean.

Mauna Loa last erupted 38 years ago. The current eruption is its 34th since written history began in 1843.

The Big Island is mostly rural and hosts cattle ranches and coffee farms but it is also home to a few small cities, including the county seat of Hilo, which has a population of 45,000.

It’s about 200 miles (320 kilometers) south of Hawaii’s most populous island, Oahu, where the state capital, Honolulu, and beach resort Waikiki are both located.

Mauna Loa’s volume is estimated to be at least 18,000 square miles (75,000 square kilometers), making it the world’s largest volcano when measured from the ocean floor to its summit.

WHERE IS MAUNA LOA ERUPTING FROM?

The eruption began Sunday night at its summit after a series of large earthquakes. It then spread to vents that formed in a rift zone where the mountain is splitting apart and it’s easier for magma to emerge.

These vents are on the mountain’s northeast side and lava emerging there could head toward Hilo, which is on the east side of the island.

Ken Hon, scientist-in-charge at the Hawaiian Volcano Observatory, said he doesn’t expect additional vents to form on the volcano’s southwest rift zone during this eruption. That means communities to the west would be spared lava flows this time.

Mauna Loa also erupted from the northeast in 1984. That time, lava headed toward Hilo but stopped a few miles short of the city.

Historically, each Mauna Loa eruption has lasted a few weeks. Hon expects the current eruption to follow this pattern.

The magma in Mount St. Helens tends to be stickier and traps more gas, making it much more likely to explode when it rises. It’s of a variety called composite volcanoes, which form concave cones.

Mauna Loa’s magma tends to be hotter, drier and more fluid. That allows the magma’s gas to escape and lava to flow down the side the volcano the way it is starting to do now. Mauna Loa is a shield volcano, named because the long, broad flanks built by repeated lava flows give it the appearance of a warrior’s shield.

In 1989, Alaska’s Redoubt Volcano, another composite volcano, belched an 8-mile cloud of ash that clogged all four engines of a KLM Royal Dutch Airlines jet. The plane fell 13,000 feet before all engines restarted and the plane landed without injury to the 245 people aboard.

Mauna Loa released some ash this time but on a vastly smaller scale than these examples from composite volcanoes.

WHAT HAZARDS ARE POSED BY MAUNA LOA’S ERUPTION?

-Lava: Molten rock could cover houses, farms or neighborhoods, depending on where it flows. But lava from the northeast rift zone will likely take at least a week to reach populated areas, allowing people time to evacuate if needed.

-Volcanic gas: Mauna Loa is releasing volcanic gases, mostly sulfur dioxide. The gases are present in their highest concentrations in the immediate area around the summit crater or vents. But they also combine with other particles to form vog, which can spread across the Big Island and even waft over to the state’s other islands.

Vog can give healthy people burning eyes, headaches and sore throats. It can send those with asthma or other respiratory problems to the hospital.

-Glass particles: When hot lava erupts from a fissure and rapidly cools, it forms glass particles named “Pele’s hair” and “Pele’s tears” after the Hawaiian goddess of volcanoes.

The particles tend not to travel far from volcanic vents — maybe only a few hundred yards or a mile — and won’t threaten many people, said Aaron Pietruszka, an associate specialist at the University of Hawaii’s Department of Earth Sciences.

“It just literally looks like hair strands. And that’s where the fluid lava is stretched by the wind to make long, thin strands,” said Pietruszka.

The glass bits — as short as a few millimeters or as long as a few inches — can be sharp.

“You wouldn’t want to be digging your hands in it because you could get a cut,” Pietruszka said.

An N95 or KF94 mask would protect against these glass particles but not against volcanic gas, said Dr. Libby Char, the director of the state Department of Health.

Mauna Loa released about 15,000 tons of carbon dioxide per day during its 1984 eruption, according to USGS data.

That’s equivalent to the annual emissions from 2,400 sport utility vehicles.

Scientists say all of Earth’s volcanoes combined emit less than one percent of the carbon dioxide that humans produce each year.