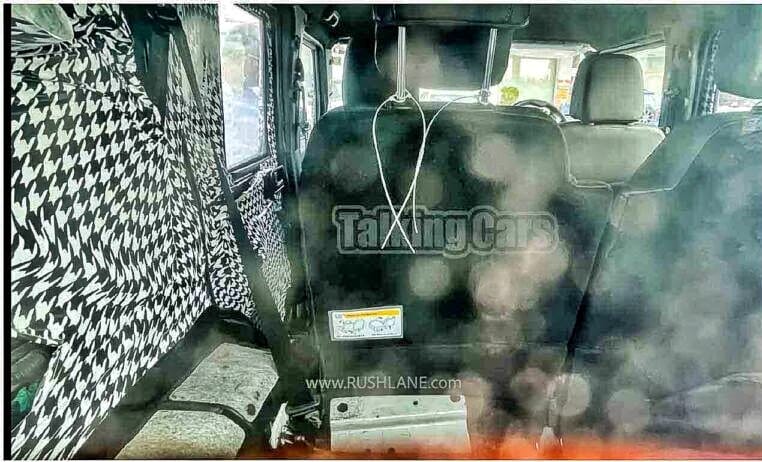 The five-door Thar will benefit from more legroom in the second-row and additional cargo space.

The much-awaited 5-door Mahindra Thar is being tested around the country ahead of its market launch. While there are plenty of spy shots of the SUV’s exterior, this is the first time we have a clear look at the SUV’s interior, its seating layout and cargo space.

As can be seen from the spy shots, the interior looks largely similar to the 3-door model with a few additions. It retains the rugged looking design with interesting elements like toggle switches and cleverly-placed exposed screws.

The 5-door Thar, however, gets a few additional features like a front armrest – which may double-up as a storage box – a sunglass holder, and what looks like a provision for a grab handle on the driver-side A-pillar.

While the prototype seen here does not get a touchscreen, the production version is likely to use an updated touchscreen supporting Mahindra’s AdrenoX software.

The second row of the 5-door Thar will offer more space than the 3-door model, courtesy of the longer wheelbase, which is expected to be 300mm more than the latter’s 2,450mm. However, the rear doors look small due to the protruding wheel arches, which could compromise ingress and egress.

Interestingly, although the prototype version here has two individual seats at the rear, similar to the 3-door model, the production version will most likely have a bench seat. It is, however, not clear whether Mahindra will offer three-row seating in the Thar. The pictures also show the boot space available, which looks significantly more than the standard Thar.

The 5-door Thar will look quite similar to the 3-door model, but get a few unique body panels. In addition to being longer, it is also expected to be slightly wider as Mahindra could increase the track or width between the wheels to maintain optimum wheelbase-to-track ratio for stability.

However, most of the signature Thar elements will be carried forward. As can be seen in this image, the rear continues with the squarish LED tail-lamps, a high-mounted stop lamp and a tailgate-mounted spare wheel.

The 5-door Thar will share its underpinnings with the Scorpio N, but will continue to be powered by the same 2.2-litre mHawk diesel and 2.0-litre mStallion petrol engines, mated to the same 6-speed manual and 6-speed auto transmissions as the 3-door version. While the power figures are not confirmed, Mahindra could increase the output to compensate for the added length and weight.

Mahindra is expected to launch the 5-door Thar sometime next year, and it will rival the 5-door versions of the Maruti Suzuki Jimny and Force Gurkha – both of which are also set to launch in 2023. The 5-door models of these rugged SUVs will appeal to those looking for a lifestyle product with an added dose of practicality. To read more about the differences between these SUVs, you can click here.