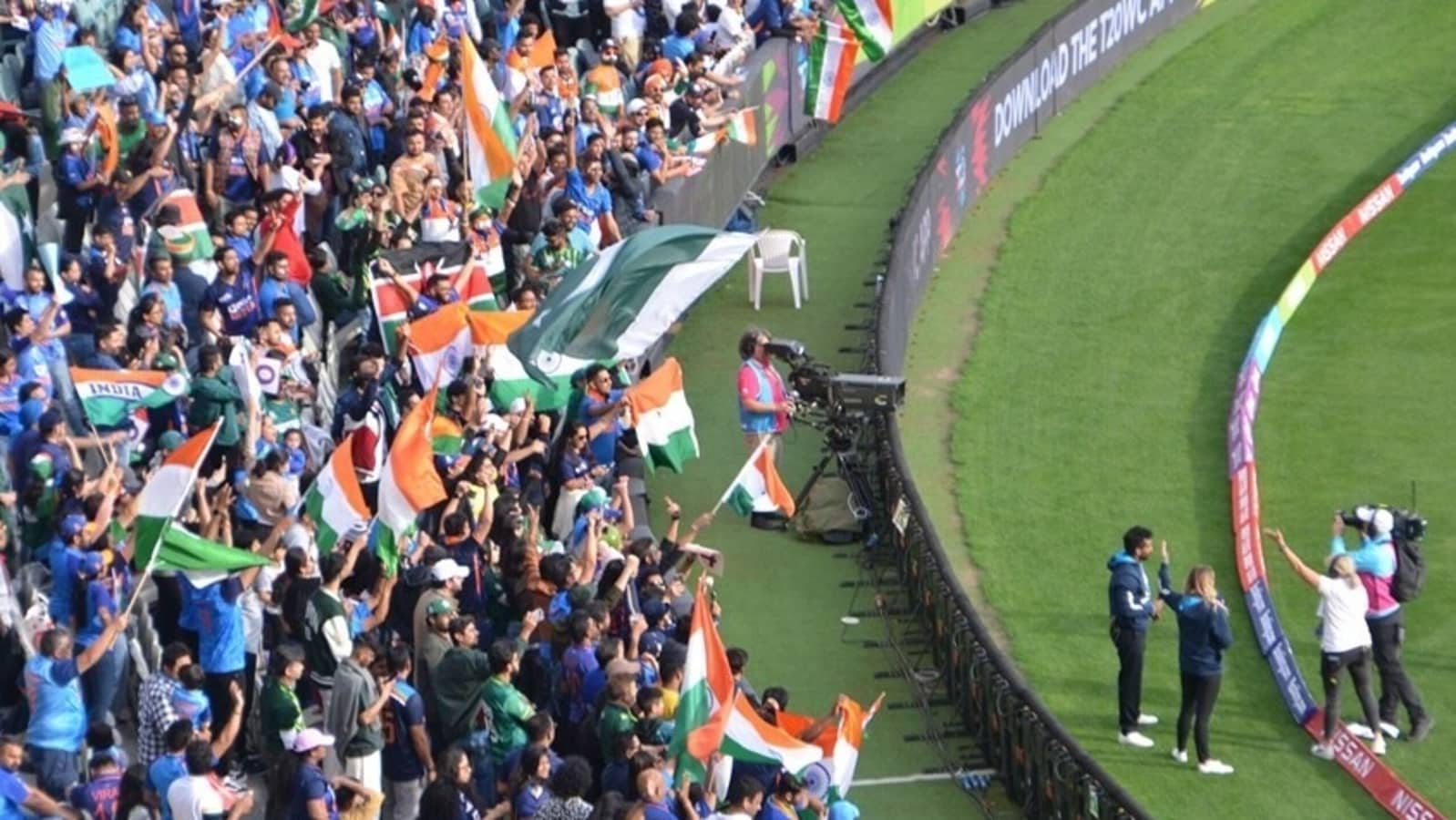 Rate this post
Like in my birth city Kolkata, the Australian east-coast city of Melbourne immerses into a festive mood when cricket is on at the Melbourne Cricket Ground, better known as the MCG. This second largest cricketing ground in the world, in terms of prestige claims equal status as the Lords in London, the Mecca of Cricket and the Eden Gardens in Kolkata where every world cricketer desires to play at least once in their life time.

Anywhere in the world, this cricket madness and associated celebrations escalates multi-fold when India plays its arch rival Pakistan. Doesn’t matter whether the match is played in Kolkata, Lahore, Dubai or Adelaide, everywhere it’s the same scene – the host city switching to a carnival mode. Streets around the arena are clogged with fans wearing blue and green jerseys, carrying national flags and dancing to the tunes of the loudly beating drums. The stadium is always packed to its capacity with spectators- their thundering roars reaching miles away.

This was exactly the atmosphere I enjoyed in Melbourne last week where India faced Pakistan in their opening Mens T20 World Cup group match. As an invited guest of Visit Victoria, I flew from my home city Sydney to Melbourne the day before the match to experience the cricket enthusiasm of the host city and the frenzied fans which included thousands from the local Indian and Pakistani diaspora joined large supporting squads and visitors other parts of Australia and overseas, mainly India.

This year defending champions Australia is the host country for this particular form of cricket game competition where each team bats for only 20 overs. Matches are generally played under lights. While most of the nation’s main cities are hosting all the 45 matches of the tournament, MCG has been selected to host seven games which includes the final and the two most esteemed matches of the tournament between India and Pakistan and Australia and England.

“Melbourne deserves to host these key matches as our city is Australia’s sporting capital”, tells Satish, an ardent cricket fanatic who moved to Melbourne from India about two decades ago. Surely there is strong back up to his bold statement.

Not only Melbourne boasts of the largest cricket stadium in Australia, the city throughout the year hosts several significant sporting events like the Boxing Day Cricket Test, Australian Open Tennis Tournament, Australian Grand Prix and the Australian Football League which is so appealing among the Melbournians that the Friday before the Grand Final is a public holiday.

If Melbourne is the nation’s sporting capital, then MCG can be stamped as its parliament. For history, pure drama and emotion, it’s hard to look past this sporting venue.

Since establishment in 1853, the venue has hosted many great sporting events from the Summer Olympic Games in 1956, Commonwealth Games in 2006 and first ever Test Cricket to the finals of the Benson & Hedges Cricket Tournament in 1985 and World Cup Cricket in 1992.

Apart from its sporting events, the MCG has also witnessed many blockbuster music concerts, and even Pope John Paul II held a mass there when he visited Melbourne in 1986.

Undoubtedly it’s a hallowed site for sport lovers from around the globe, even if the bat and ball game is not their most favourite.

There are MCG guided tours available to give visitors the opportunity to sense some great sporting memories while going through the stands, pavilions, change rooms and the famous Long Room, an exclusive arena for the members.

An interesting feature for cricket lovers is the Honours Board which displays names of cricketers who have either scored a ton or bagged five wickets in an innings at the MCG. Indians feel proud to see names of Gavaskar, Tendulkar, Kapil Dev, Kohli, Rahane, Bumrah and others sharing the long list with worlds top cricket legends.

However for sport lovers a visit to the Australian Sports Museum at the MCG can be recommended as mandatory. It’s one stop shop for celebrating sport in Australian society. There is something for everyone from historic artefacts of some of the great moments in the story of sport, places to learn about the greats of Australia’s most popular games, fun interactive moments, and the opportunity for flat out play.

But it’s just not sports that makes Melbourne vibrant and lively. Though I am a long-time Sydneysider, Melbourne is closer to my heart. I admire its colonial architecture that flank the tree lined avenues, love the leisurely tram rides and riverside walks, enjoy slipping through the back lanes, adore the cultural, art and literary scenes and relish the lively café atmosphere. More importantly I see there through my explorations shadows of Kolkata where I was born and lived a good part of my life.

Pitched on plain land with rivers edging the cityscape, both cities are state capitals, rich in history and heritage and take extraordinary interest in creative elements of life from literature, theatre and cinema to food and wine. Trams as a part of the public transport system is surely a common link while cruising the Yarra River along the Botanical Garden have synergies with boating the Hooghly and going past similar surroundings.

Like Kolkata, her love of arts, literature, theatre and cinema makes city-life bubbling with excitement. Any visitor will notice that high energy cultural exuberance almost in every corner of the city but distinctly when visiting the Southbank precinct where the Arts Centre and Southbank Theatre present productions of Melbourne Theatre Company, and the National Gallery of Victoria exhibit extensive collections from Europe, Asia, America, and Oceania. Or when stopping at the Federation Square where art meets architecture. Melbournians claim their city’s cultural heart beats.

Melbourne is known as one of the world’s great street art capitals for its unique expressions of art. Generally comprising of spray painting, stencilling or murals works, it uniquely presents a feast of colour, ideas and energy while adoring walls of many alleyway buildings. In one of these narrow laneways it was nice to discover a mural on the Indian cricket stars – Rohit Sharma, Virat Kohli and Hardik Pandya.

Later I found out that this piece of art was commissioned by Visit Victoria to venerate the cricket excitement around the India-Pakistan match. What strikes me most appealing in Melbourne is the café culture, the city’s obsession with coffee being well known. Locals love spending endless time in the café with friends chatting over different subjects from politics and sports to recent Netflix

movies. Or to quietly read the newspaper or finish the last few pages of a best seller, taking a break only when sipping the coffee. Melbourne’s well-known alleyways and arcades, which are an attraction by itself, are home to some of the best cafes in town particularly around Flinders Lane, Degraves Street or Centre Place Arcade. Visitors love spending time there to enjoy Melbourne’s eclectic spirit and potpourri of cultural mix and cosmopolitanism. Melbourne is also full of bars and one of my favourite joint is the Cricketer’s Bar at the Windsor Hotel Located at the Paris end of the city, overlooking the majestic Parliament House of Victoria, this 1853 built edifice is a treasured landmark of Melbourne and a venue for city’s elites to meet, drink, dine, socialise and enjoy its stylish ambiance.

On the match day, all domestic flights into Melbourne were overbooked and the cityscape resembled more like any quarter in Punjab or Tamilnadu with the streets, shops, restaurants and cafes filled with people from the sub-continent outnumbering the ‘gora’ locals. Surely there was a sense of festivity in the air, but underneath the tension for who’s going to win couldn’t be ignored.

“The Ashes possibly motivated 94m people while an India-Pak contest hits around 1700m around the globe, so the tension and excitement is obvious”, tells me a ‘Bharat Army’ member who has come all the way from Delhi to support Team India. His passion for cricket and in particular for the match became explicit when I reached the arena outside the stadium. I hardly see in Australia such a large gathering of people which greeted my eyes with a vibrant patch of blue and green. The mood was exhilarating with both Indian and Pakistani supporters dancing with the high-energy drum beats. The atmosphere inside was equally electrifying with the thunderous roars of supporters on a boundary or a wicket fall being heard miles away.

It was an exciting match with India clicking victory on the last bowl. However to me it was a triumph for the game of cricket and a big win for the host city Melbourne.