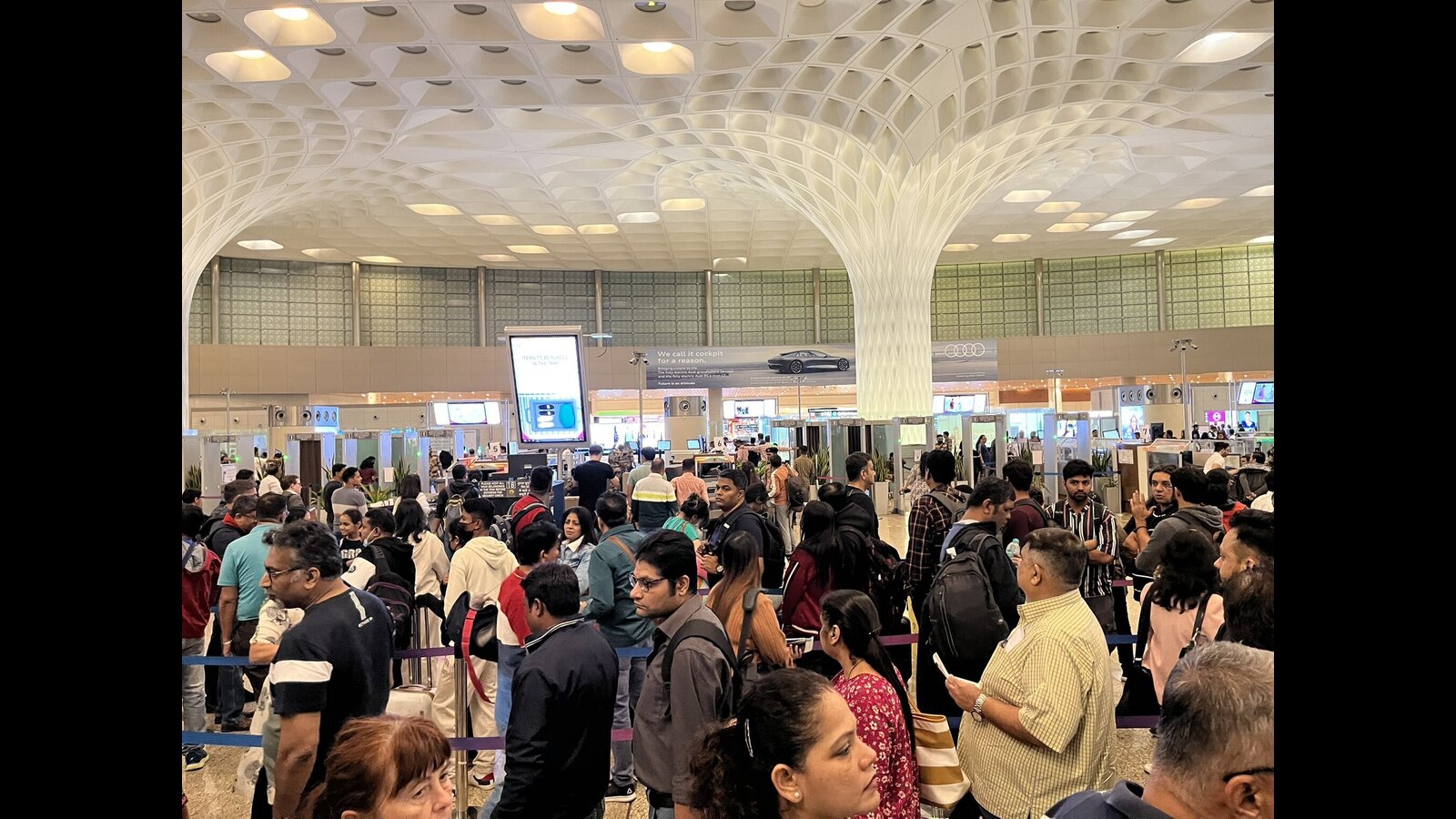 Rate this post
This is the first holiday season that the fear of Covid-19 has not been dangling over heads like Damocles’ sword. While people are excited to jet off on vacation, chaos has been running supreme at Mumbai airports with serpentine queues, immigration hassels, security checks. Taking to social media, the Chhatrapati Shivaji Maharaj International Airport (CSMIA) put out an advisory asking passengers travelling during the month of December, which is known to be the holiday month, to arrive earlier than usual.

The post stated: “Chhatrapati Shivaji Maharaj International Airport is already seeing a surge in passenger volume with the onset of the festive season, and the numbers are expected to further rise in the coming weeks. We request all our passenger… to allocate additional time for travel related formalities and mandatory security protocol. Passengers travelling internationally are advised to reach the airport at least 3.5 hours prior to their scheduled flight. Travellers taking domestic flights are requested to reach the designated terminal at least 2.5 hours in advance.”

This was done in order to ensure travellers had adequate time to complete all pre-flight formalities. Passengers travelling to international destinations have been asked to arrive at least 3.5 hours prior to their boarding time, while domestic travellers have been advised to arrived at least 2.5 hours earlier.

A spokesperson for the CSMIA told us, “The advisory released is only for the holiday season as the security and immigration check points are handled by external entities. CSMIA handled a record passenger movement with 1,50,988 travellers transiting through the airport on December 10 this year, including domestic travellers of 1,11,441 and international travellers of 39,547. We cannot be more happy that the airport is bouncing back with crowds. We are trying our best to ensure people will have a happy flight during the holiday season. Post-Covid-19, tier 2 passengers, who are used to arriving for their trains at the last minute, are also travelling by flights. With the revival of air traffic, CSMIA has seen rise in passenger traffic. CSMIA has augmented its manpower resources with the inclusion of ‘Passenger Service Executives’ complemented with infrastructural facilities to meet passenger expectations and consistently deliver exemplary service standards.”

However, many passengers have taken to social media to voice their grievances. Shantanu Bhattacharya from Powai was travelling to Kolkata on December 8 and was faced with lines that seemed never ending as soon as he entered the airport. He took to Twitter to share his ire of the crowds at 5.45am along with a video and says, “Check in was smooth but the security was mayhem. Even with the crowds, not all the frisking and metal detection stations were manned, which was causing the longer wait time. The solution is to have more security counters and pay for more CISF personnel.”

Mumbai-based marketing professional, Nestor Lemos, flew to Kathmandu on December 11 from T2, where he faced issues with the immigration desk. He says, “While the check-in was quick, we were caught up at immigration for one hour. They need to look into increasing the officials at the immigration counters, especially during this month so that the passengers do not have to wait in such long lines when there is a possibility of them missing their flights.”

Excited to begin her vacation in Pondicherry, corporate lawyer Manasi Parekh flew out from T2 Mumbai this week. Aware of the advisory, she and her husband left three hours early to get to the airport. “We had to wait in a ten-minute long line for checking in our baggage. Another 20 minutes were spent at the security check. We spent ten more minutes getting our bags double checked. It was too crowded for 4am flight at Mumbai airport. We wanted to check into the lounges but those were full so we had to wait next to our gates for around an hour or so before we could board. The holiday rush is definitely real.”

A frequent flyer, lighting designer Kunjan Vasani from Vidhyavihar took a flight to Bangalore on December 9. He reached the airport 2 hours before his 4pm flight was supposed to take off. Expecting a smooth process as he didn’t have to check in his luggage, he says it took him 50 minutes from entering the main gate to his boarding gate. Adding, he says, “The airport was very busy and crowded. Usually, it takes me anywhere from 15-20 minutes when I don’t have to check in any of my bags. While coming back, I landed at T1 and everything moved very smoothly.”

Isa Khedwal, a project co-ordinator from Mumbai flew out to Bangalore at today at 6.45am from T2. Keeping the holiday rush in mind, she says she wanted to be cautious to ensure she doesn’t get stuck in lines or miss her flight. Adding, she says, “I’m checking into the flight online so I have a boarding pass ready in hand. I’m even trying my level best to pack my luggage so I don’t have to check in my baggage and can just carry it with me on the flight. This way I can just directly get to the security check and to my gate quickly. I’m planning on reaching the airport around 2-2.5 hours early, even though I live only a few kilometres away.” However, she still had to spend 30 minutes at security check because the lines were too long and almost missed her flight.