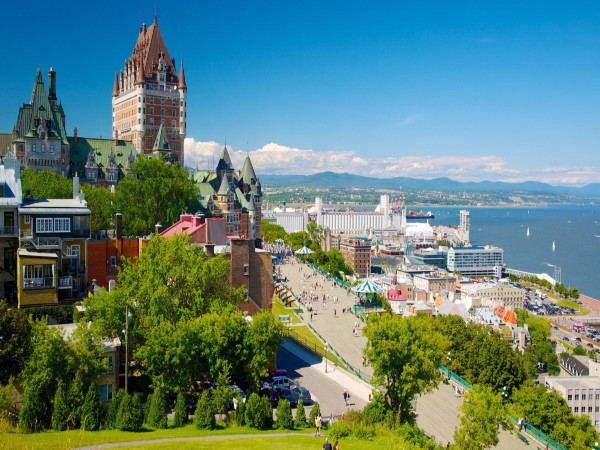 One of the oldest cities in North America, Quebec City is the Capital of the province of the same name and in Vieux-Quebec has the only surviving walled city in the Americas north of Mexico. The historic district of Quebec was designated a UNESCO World Heritage Site in 1985 for its cultural and historical significance.

Its twin areas – Basseville and Haute-Ville – surround the Chateau Frontenac. In Hauteville, you will find narrow lanes running between grey, high-walled houses reminiscent of a medieval French city, while lower down Cap Diamant Basse-Ville – the site of the original settlement – is home to lively cafe culture and boutique shops.

The Chateau Frontenac is one of the city’s dominant landmarks: this large hotel on the Cap Diamant is a model Loire chateau. The Basilica of Notre Dame is also very French in feel. Another building left from colonial times is the Haute-Ville you will find the church of Notre Dame des Victories. One of the area’s best-known attractions is the Musee de la Civilisation.

There is a wide range of museums that cover the history and culture of the region, among them the Musee de Quebec in the Parc des Chaps-de Bataille, which has a fantastic art collection. The park is the site of the battle that ended the rule of the French in North America and holds free concerts in summer.

At the other end of the year, the Quebecois cheer themselves up with the biggest winter carnival in the world, which features a talking snowman called Bonhomme, who inhabits the snow Palace and presides over horse-drawn sleigh rides the International Canoe Race across the part-frozen St Lawrence River, dogsled races, parades and the International Snow Sculpture Event. What better way could there be to close the winter blues away?

Any time of the year, depending on your interests but it can be very cold in winter.

Quebec comes from the Algonquin word meaning ‘where the river narrows.