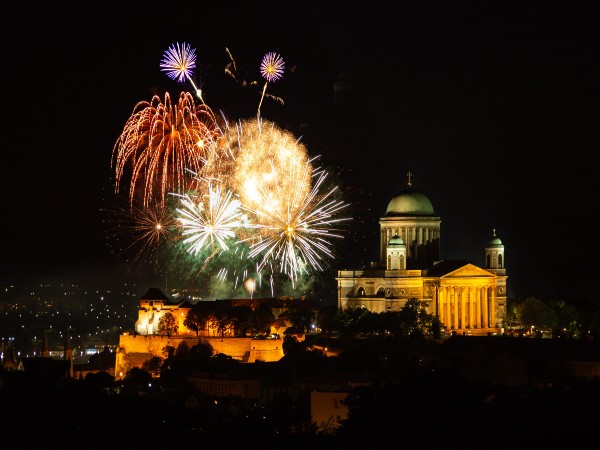 Church and State combine in Esztergom in miniature granduer. The setting is incomparable – commanding the great Danube Bend, where the river makes a right-angled turn south towards Budapest, and forms the current border with Slovakia. In physical size, it has never been bigger than its present small town size. In Stature, where Esztergom once commanded, central Europe trembled.

Its heyday began in 960 When Hungary’s ruling Arpad princes chose the already important. Moravian fortress as their royal seat and capital. King Stephen, I was crowned in 1000 and set up the Archdiocese of Esztergom which is still the seat of the Roman Catholic Primates of Hungary. For 300 years, Esztergom controlled not only the bodies and souls of Hungary but also the vital pan-European trade flowing up and down the Danube.

Incomparably rich and splendid, once Esztergom’s political power was broken by the 13th century Mongol invasion, the city’s history wove a dramatic pattern of bloody massacre, devastation and reconstruction on the same sites. What you see now includes evidence of Celtic, Roman, Moravian, medieval Hungarian, Tatar, and Turkish occupations – whole fragments of which are incorporated into the dazzling buildings that survive; and they include everything from Gothic, Romanesque and Renaissance, to Ottoman, Baroque, Rococo, and Hungarian Classist styles.

Even after the city’s mutilation during the Nazi retreat of 1944, meticulous restoration has preserved every layer, and archaeology is still recovering more. Better still, many original artefacts squirrelled away at the start of each fresh catastrophe, have returned to Estergom’s breathtaking museums.

Jewels, chalices, fabrics, paintings, tapestries, and a thousand other small objects show the exquisite workmanship available only to the highest Royal, Civil and Ecclesiastical Powers. Like a Russian egg, Esztergom reveals itself gradually, down to its finest detail. You can stroll around it, or choose to stop for an awe-struck month.

Come between June and August for the annual Esztergom Castle Theatre Festival. May and September are less crowded, and beauty may be quietly beheld.

If you can, and it’s easy, arrive by boat on the Danube.