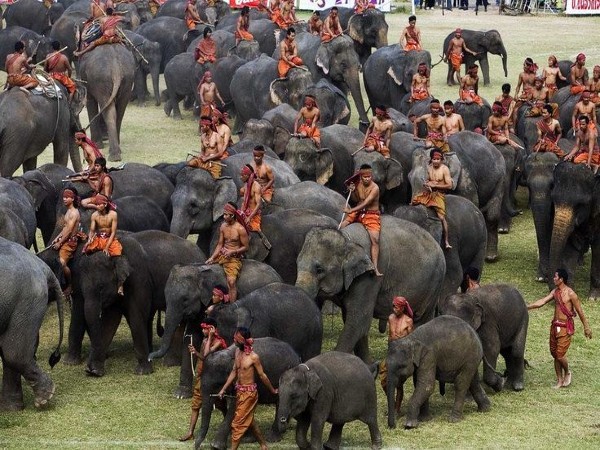 Today Surin Province shares its southern border with Cambodia but once it was part of the Khmer empire. Its ethnic population is largely Suay, who for thousands of years have been recognised for their tradition of capturing and training the elephants that lived in the forests near the border. Sadly, many years of war and cross-border incursions have left these forests inaccessible, so the Suay elephant handlers have gone into entertainment.

Northeast Thailand – Isan – has some wonderful festivals, and if you are keen on elephants, you must see the Round-up, held in Surin City each November.

Traditionally, a mahout’s skill is passed, down from father to son and young boys grow up with baby elephants, forming extraordinarily strong, deep, life-long relationships. Unlike the elephants in northern Thailand, which have long been considered working animals, in Surin, they are as close as family.

The Round-Up is a celebration of the intelligence, skill, agility and strength of these gentle creatures, and it begins with several hundred animals carrying local bigwigs, a few tourists, and mahouts in traditional battle dress, plus many people on foot, processing through the town to a massive elephant banquet of elegantly displayed fruit. The festival, which was inaugurated in 1960, is now widely known and there may be as many as 50,000 spectators enjoying the proceedings.

During the course of two days, there are many shows, such as elephant football matches and elephant tug-of-war against 100 men, demonstrations showing how to capture a wild elephant, how to train them for working in the logging industry, and even a demonstration of their use in battle. All of this is interspersed with performances by school children, and traditional music, which is played throughout. The grand finale features about 2,000 costumed performers and several hundred elephants and it’s a magnificent sight to behold.

Usually the third weekend in November, but check to make certain.

Surin is an interesting and not much-visited province. Apart from its elephant culture, it is famous for its Khmer ruins, including the oldest in Thailand, its extremely high-quality silk, and hot, spicy food such as grilled meat or fish salads (Laaps), green papaya salad (som tarn), various fried insects and sticky rice. As Isan People travelled seeking work, their food because famous throughout Thailand.