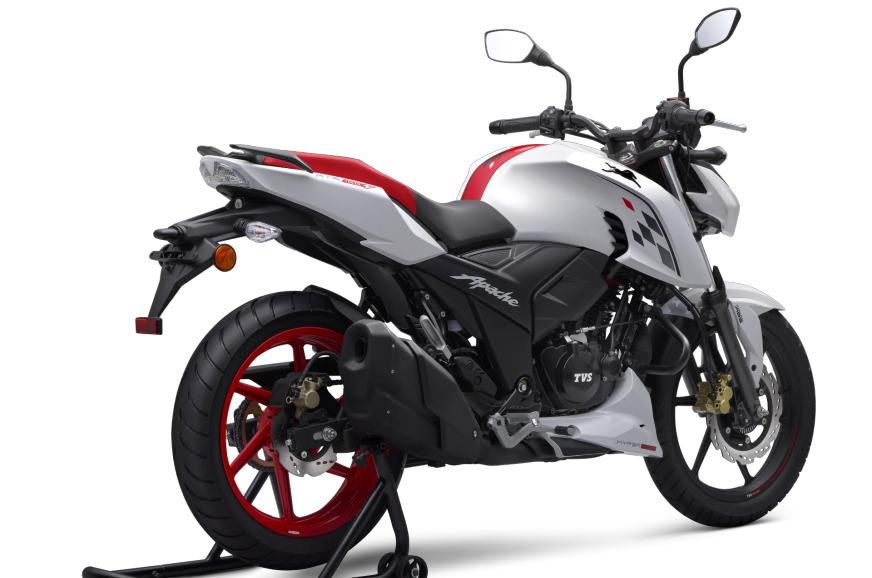 The special edition now gets a Pearl White colour; is priced at Rs 1.30 lakh.

TVS has launched a new colour option to the special edition of its TVS Apache RTR 160 4V in India. It bears a few cosmetic differences over the standard motorcycle and has a new ‘Bullpup’ exhaust.

Starting with the bike’s appearance, the special edition TVS Apache RTR 160 4V is swathed in a new Pearl White colour that covers most of the bodywork. Adding a dash of contrast is the red colour on the central portion of the fuel tank, seat and the rear wheel. The bike certainly looks striking in this colour, but the differences to the standard Apache RTR 160 4V aren’t limited to cosmetic bits.

This special edition motorcycle also gets a new, beefier looking exhaust muffler that TVS calls the ‘Bullpup’ exhaust, seemingly inspired by the Bullpup machine gun. The company says that while the exhaust muffler looks bigger, it is 1kg lighter than the one on the standard bike. This helps improve the power-to-weight ratio and also enhances the exhaust note, adds TVS. Besides this, the bike also gets adjustable levers as standard.

As far as the engine is concerned, the special edition bike isn’t any different from the other variants. It is powered by a 17.55hp, 14.73Nm, 159.7 cc, air and oil-cooled, single-cylinder engine.