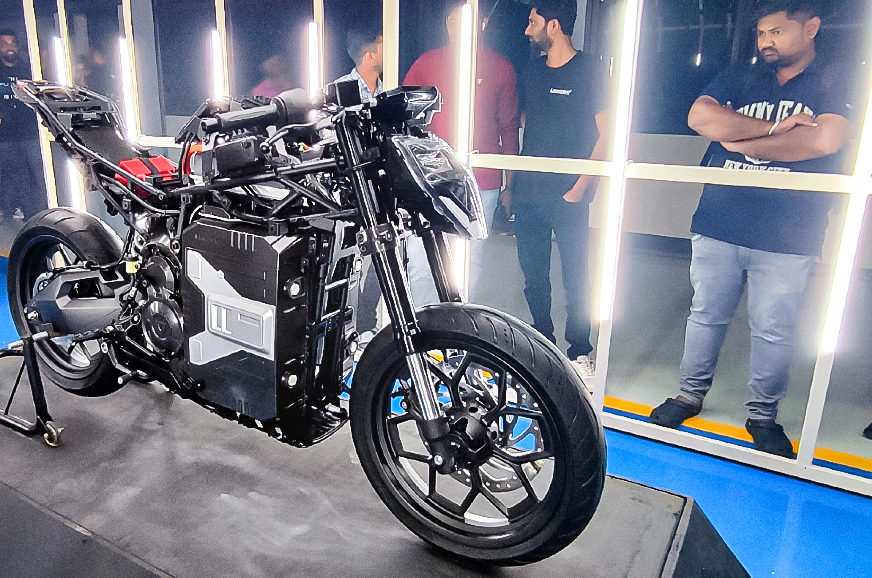 Bookings for the F77 will begin on October 23, while its launch is scheduled for November 24.

Ahead of its launch on November 24, 2022, Ultraviolette Automotive has unveiled the production-spec battery pack that will power its upcoming F77 electric motorcycle. The TVS-backed brand has announced that bookings for the F77 will begin on October 23.

. Significant changes over the 2019 prototype

Unlike the removable battery packs that we’d seen on the initial prototype in 2019, the new battery pack is fixed, larger and packs more lithium-ion cells. Encased in an aluminium case are 21,700 lithium-ion cells as opposed to the 18,650 cells in the prototype. That translates to a usable capacity of 10.5kWh on the top variant of the Ultraviolette F77. That effectively makes the F77’s battery size the largest of any electric two-wheeler in India.

Ultraviolette says that the decision to switch to a fixed battery pack was taken in the interest of improving range. And, as of last week, the Ultraviolette F77’s range is 307km as per the Indian Driving Cycle (IDC). That’s significantly more than the 150km that the initial battery packs managed. What’s more, the company says that it will continue working on improving the range.

In order to incorporate the new battery, Ultraviolette had to make significant changes to the F77.

Some of these changes were meant to be included in the F77’s Gen 2 update once the bike had launched in 2020. However, due to delays caused by the COVID-19 pandemic, the company focused on incorporating the planned updates into the production motorcycle that is set to be launched next month.

Ultraviolette F77: changes over the 2019 prototype

The changes include a complete redesign of the entire chassis, and it now comprises a spine section that joins the headstock to the load-bearing motor mount. The frame itself is two times stiffer than the old frame. The battery pack hangs below it and, as we’ve mentioned earlier, it is non-removable. Ultraviolette says they’ve worked extensively on ensuring effective heat management of the battery pack using passive air-cooling.

Besides the new battery pack, Ultraviolette has also worked on improving other areas of the electric motorcycle. This includes refining the step-down transmission for better durability and reduced noise levels as well as redesigning the swingarm. While the original swingarm was a milled unit, the new swingarm is made using a more cost-effective casting method.

The company also showcased the production-spec F77, sans the bodywork. It revealed the chassis in its entirety, suspended by a USD fork and a monoshock, both of which are pre-load adjustable. As for some of the features on the bike, the production-spec F77 will have three ride modes and riders can choose between different levels of regen, to suit their riding style.

Prospective customers can reserve an Ultraviolette F77 for a booking amount of Rs 10,000 starting October 23. According to the company, the battery pack comes with a warranty of three years, which can be extended too.

What do you think about the Ultraviolette F77 electric motorcycle? Let us know in the comments.