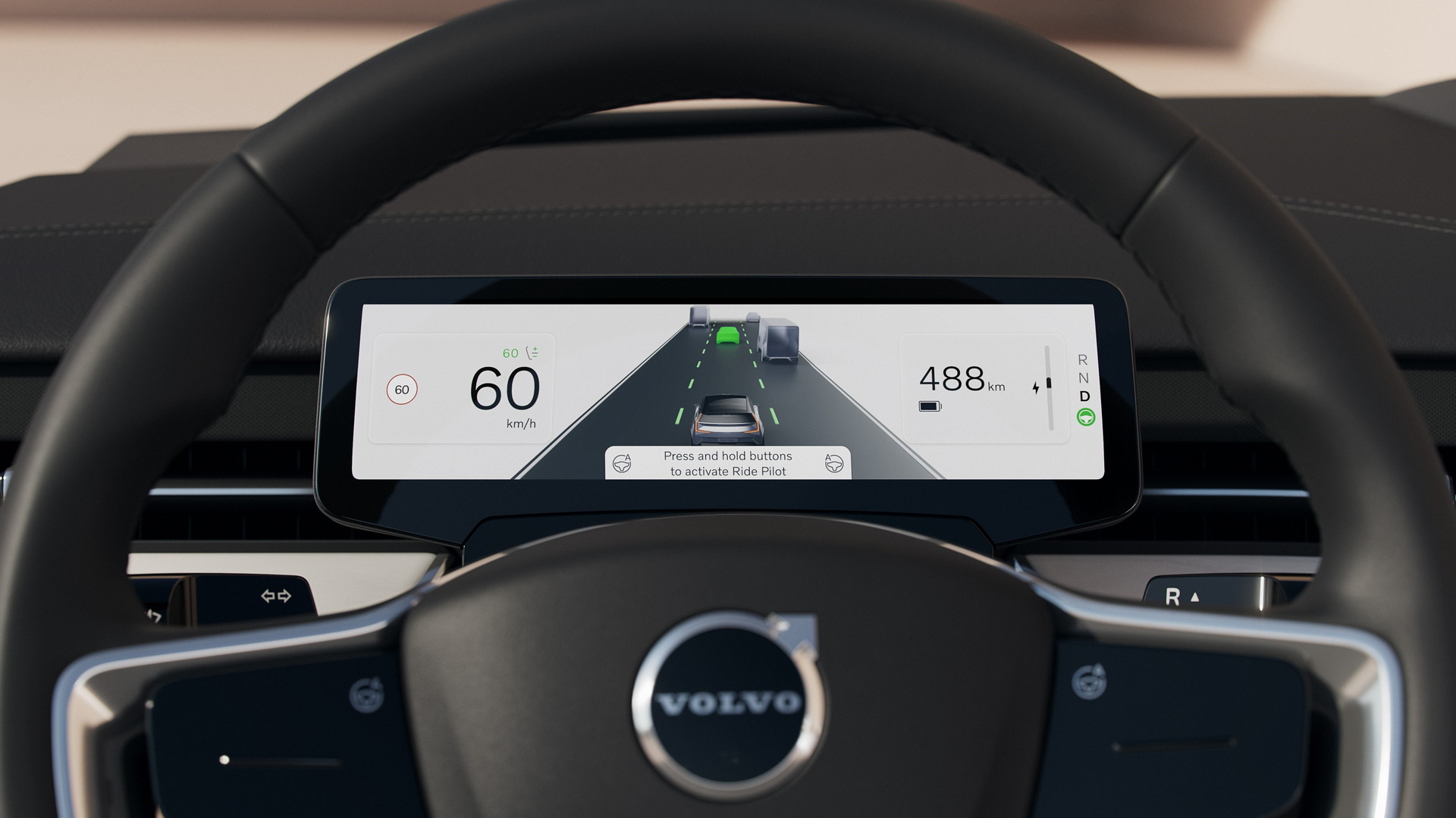 Most of the EX90’s functions will be controlled by the Google-operated touchscreen.

Volvo’s new flagship electric car, the EX90, is based on the Volvo XC90 SUV, and the carmaker has now previewed the model’s interior technology ahead of a full reveal on November 9.

Set to go on sale next year, the electric SUV will be Volvo’s new flagship and the first to be underpinned by the carmaker’s new SPA2 platform. It will come equipped with safety technology not seen on a production vehicle before, and will be sold alongside the heavily refreshed version of the current XC90.

Volvo EX90’s interior does away with physical buttons

The EX90’s interior is focused on delivering clear information and data to the driver. Volvo has done away with physical buttons with the majority of the functions such as navigation, phone data and media now controlled through the large portrait-styled touchscreen using operating software developed by Google.

There’s also a small screen behind the steering wheel to display driver-focused information including range, speed and navigation instructions. With the screen, Volvo aims to provide the driver with the “right information at the right time”, and reducing confusion, distraction and information overload.

Volvo EX90 is inspired from the Concept Recharge

Released as the production-spec version of the Concept Recharge concept shown in 2021, the new EX90 will provide Volvo with a long-awaited entry into the increasingly important full-sized electric SUV segment where most premium manufacturers have launched their debut EVs in recent years.

Volvo’s current EVs, the XC40 Recharge and the C40 Recharge, sit a segment lower and use the same CMA platform as the regular ICE-powered XC40.

Not everything from the concept will make it to the EX90 like the four free-standing seats, for example. However, the skateboard-style architecture will offer new levels of interior space and flexibility.

The Concept Recharge also heavily hinted at how Volvo’s new flagship EV retains the XC90’s core characteristics while ushering in an entirely new approach to exterior and cabin design. It will continue to focus on space and practicality with the ‘less is more’ approach exhibited by the concept.

Volvo EX90: on board safety tech

Volvo claims that the new EX90 will be underpinned by state-of-the-art safety systems. Fitted as standard, the new technology will also be available on other future Volvos. The tech includes a “protective shield” both outside and inside the car, using radar and cameras to assist the driver when they’re either distracted, tired, or make a manoeuvre “just a millisecond too late.”

It includes a lidar system that maps out the environment around the car and acts if the driver fails, taking steps such as reducing the car’s speed and steering slightly to avoid obstacles and hazards. Coupled with cameras, which keep an eye on the driver’s attention levels and well-being, Volvo claims that the new features can reduce the risk of death or serious injury by up to 20 percent.

Volvo recently decided to phase out existing plug-in hybrid electric vehicles (PHEVs) in favour of EVs. In India, the Swedish carmaker aims to launch one EV every year, with the carmaker launching the XC40 Recharge this year and the launch of the C40 Recharge slated for next year.