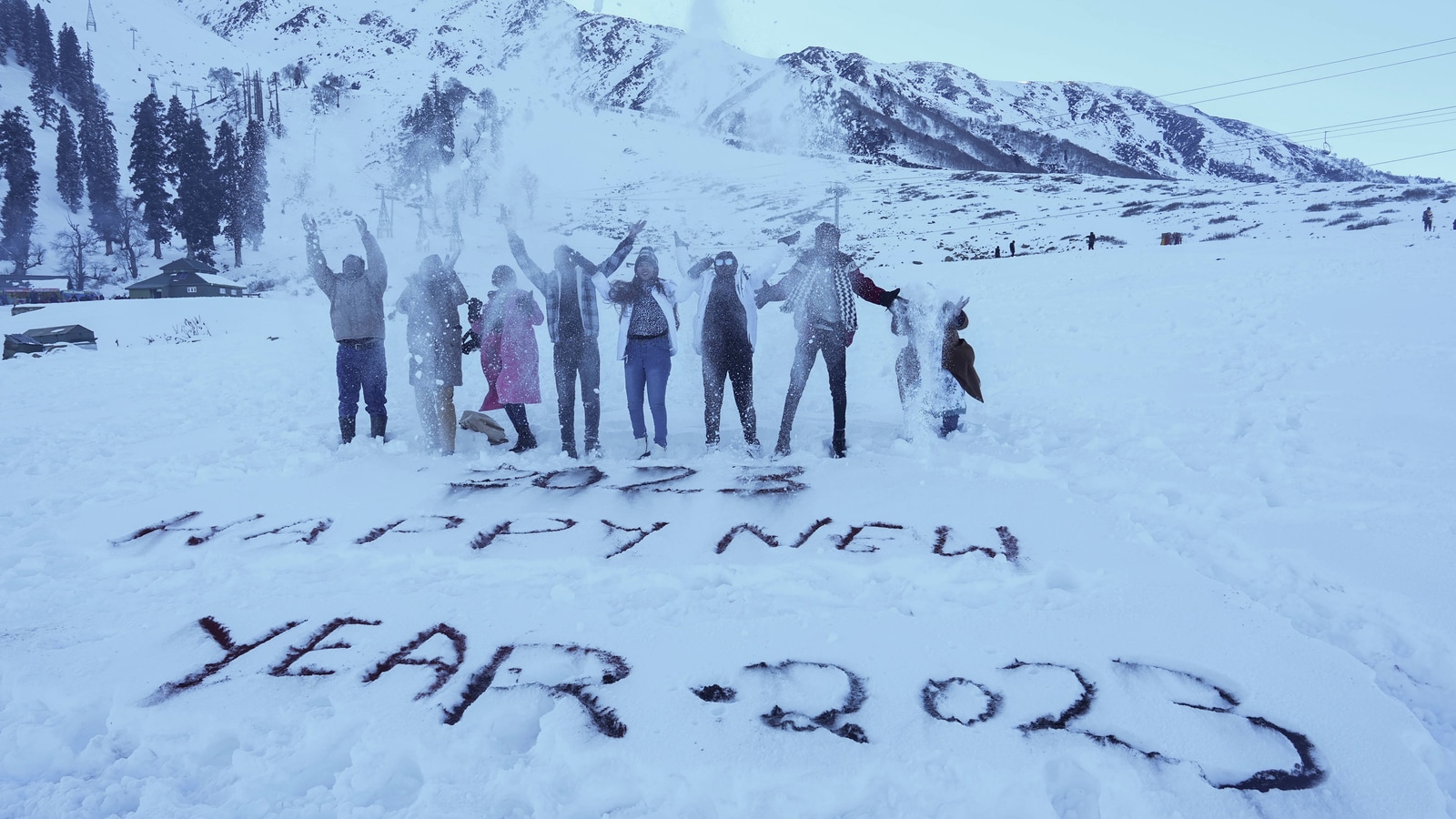 Rate this post
Tourists thronging Kashmir to celebrate Christmas and New Year created a buzz in the Valley as all the tourist resorts, including Gulmarg, Pahalgam and Sonamarg, were sold out even before the celebrations could begin. The festivities ended on a high note as tourists started their New Year amid snow-clad mountains and peaks in the Valley.

As Christmas and New Year came closer the number of tourists arriving in Kashmir swelled and the celebrations which commenced on Christmas eve ended with New Year festivities on December 31. As Kashmir teemed with tourists in the winter season, hotel owners announced special packages for gala dinners and other entertainment programmes. Due to COVID-19, not many foreign tourists visited Kashmir in 2020 and 2021 but in 2022 the restrictions were lifted which led to the arrival of foreigners in the Valley after a long time.

Till August 5, 2019–when the Centre announced its decision to abrogate J&K’s special status and bifurcated it into two Union Territories–uncertainty over how the tourist season used to haunt the stakeholders. It was only during the summer months that tourists used to visit Kashmir but the terrorists at the behest of Pakistan used to leave no stone unturned to ruin the tourist season by calling for shutdowns, orchestrating street protests and sponsoring stone-pelting.

Pakistan-sponsored turmoil for three decades hit the tourism industry very hard. Even during the peak season hotels in Kashmir used to have zero occupancies. Tourists visiting Kashmir in the winter season used to be a rare feat. Former political rulers used to hide behind the conflict whenever they were reminded about Kashmir’s tourism industry being in tatters. They had only one answer i.e. situation in J&K cannot change till talks are held with Pakistan and the terrorist leaders sitting across the Line of Control (LoC). Kashmir was an “issue” which only Pakistan and the terrorist leaders could have resolved.

Just three years ago no one could have even thought that Kashmir would remain abuzz on the Christmas and New Year eves and that tourists from across the country would arrive in the Valley to spend the year-end holidays. Hotels will remain booked in winter and the tourism stakeholders would remain busy even in the off-season.

During the past three years, the government has put in relentless efforts to restore the pristine glory of Kashmir by reviving whatever the Valley had lost after 1990 when Pakistan-sponsored terrorism broke out in J&K. Till the nineties, people from across the country and the world used to visit Kashmir in large numbers but the arrival of gun-toting terrorists in 1990 dealt a severe blow to the tourism industry in the Himalayan region.

Terrorists on the instructions of their bosses sitting in Pakistan closed down cinema halls, gardens, hotels and restaurants to chase the tourists out of Kashmir and create a fear psychosis in the minds of the visitors. Their actions kept the tourists away from Kashmir for a long time, leading to the people associated with the tourism industry suffering huge losses. After the abrogation of Article 370, a temporary provision in the Constitution, Jammu and Kashmir has changed for the good. Its transition into a Union Territory has proven to be a blessing for the common people.

During the past three years, J&K has witnessed unprecedented development in every sector. The peace has returned. Terrorists sponsored by Pakistan have been shown their right place. Stooges who used to call for shutdowns, and protests and used to dance to the tunes of their masters sitting in Pakistan are either behind the bars or have turned silent.

Terrorists are finding it hard to survive as they have lost local support and the terror ecosystem that used to help them to disrupt normal lives has been shattered. The government restoring the sense of security among the people has driven home a point that no one will be allowed to vitiate peace. Tourists have returned to Kashmir and their number is increasing with each passing year.

Kashmir-based leaders, who used to claim that peace can never return till talks are held with Pakistan and the leaders of the terror groups, are finding it hard to believe that more than 26 lakh tourists visited Kashmir in 2022. They are watching the developments with their eyes wide open and their mouths shut. Whenever they get an opportunity to make some noise they do it but an ordinary man in Kashmir seems least interested in the slogans being raised by them.

The revival of the tourism industry has created hundreds of direct and indirect employment avenues. The local economy has got a much-needed boost. Houseboats, hotels, guesthouses and restaurants deserted for three decades are abuzz with guests. Taxi drivers, shikarwalas, pony wallas, tourist guides, cooks, travel agents and others associated with the tourism sector are busy earning their livelihoods even in the winter season.Winter tourism idea

The idea of the helmsmen to turn tourism into a 12-month activity has turned Kashmir into one of the most vibrant and happening places in the country. In three years J&K has broken many records. It’s fast emerging as one of the most developed regions in the country and is welcoming all guests and tourists with open arms.

People of J&K have endorsed the decision of Prime Minister Narendra Modi-led regime to end the 70-year-long status quo by actively participating in all development-related activities. In the past three years, Kashmir hasn’t observed a shutdown for even a single day and the stone-pelting has vanished. Separatist conglomerates that used to implement the directions that were passed by the terror bosses based in Pakistan have either been banned or have wound up their offices and shops to keep themselves out of trouble.

Christmas and New Year celebrations passing off peacefully and with the active support of natives are ample proof of the fact that no one in Kashmir is interested in Pakistan and its agenda.