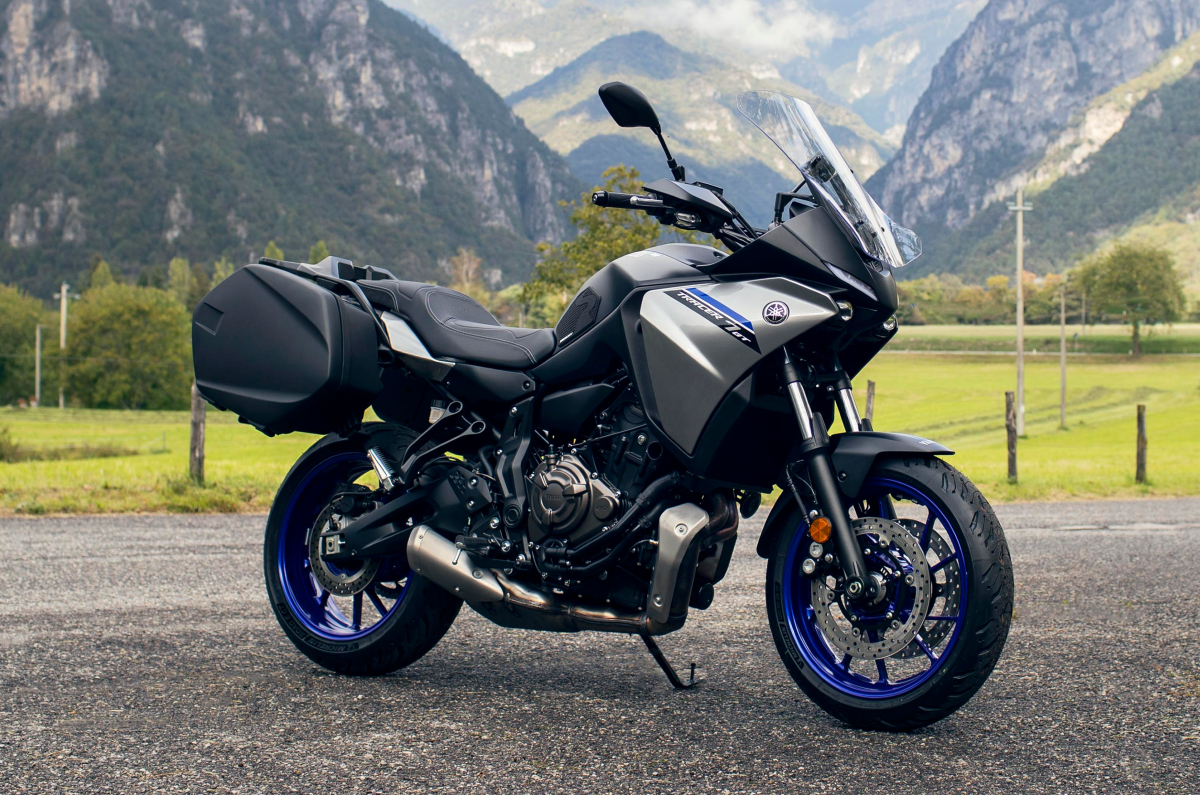 The revisions range from bigger brakes and radar systems to a larger engine for the Niken GT.

While it hasn’t yet shown quite as many new models as its Japanese competitors (check out the new Honda Transalp, Suzuki V-Strom 800 and Kawasaki’s future-proof concepts), Yamaha has used EICMA to roll out a host of updates to its sport touring line-up. The Tracer 7, Tracer 9 and Niken GT have all been revised, with changes ranging from new TFT screens, bigger brakes and radar systems to even a larger engine for the latter.

Seeing as how they’re based on the MT-07, it isn’t surprising to see the Tracer 7 models get updates that are in line with what the MT received recently. Chief among these is a new 5.0-inch TFT display equipped with Bluetooth connectivity. To go with the added functionality that this brings, the switchgear has also been revised.

On the mechanical front, the only change is the introduction of larger brake discs, up from 282mm to 298mm.

There is only one model in the Tracer 9 line-up that’s been updated, but the changes are rather comprehensive. It’s the range-topping Tracer 9 GT+ that’s gotten the special treatment, and the headline grabber is a new radar-assisted adaptive cruise control system. We have seen this feature on motorcycles in the recent past, but only on range-topping litre-class and above machines (and never from Yamaha), but this now being the Japanese brand’s flagship tourer, it becomes the smallest motorcycle today to get the tech.

Riders can choose from four preset following distances, and Yamaha says that it has tuned the system such that speed is maintained smoothly even in corners (as a bike leans over, the tyre’s rolling circumference reduces, causing engine RPM to spike). Even cooler, the system has a “passing assist” feature that notices when the car ahead is getting close and you turn the indicator on to pass. At this point, it will then smoothly accelerate the bike for you so you can complete the pass – something we’ve seen only in four-wheelers thus far.

Equally ingenious is the new ‘Unified Braking’ system, which is not only a first for Yamaha, but an industry first. It combines data from the IMU and the radar system to actively control the motorcycle during the braking phase. There are two primary elements to this feature: collision avoidance and brake force distribution. When the system detects a collision and concludes that the rider’s braking inputs aren’t sufficient to avoid the collision, it will increase brake pressure to the front and rear wheels to help slow the bike down.

The second aspect is a sort of extension to the CBS systems we see on sub-125cc two-wheelers in India, just vastly more complex and intelligent. As per Yamaha, “When only the front brake is used by the rider, the hydraulic unit automatically applies braking force to the rear wheel, with the degree of intervention calculated using IMU data related to changes in acceleration and lean angle. When only the rear brake is used, the system will sometimes – but not always – apply additional braking force to the front wheel via the hydraulic unit, depending on the brake pedal input and IMU data regarding the bike’s attitude.”

Essentially, it builds upon the rider’s brake inputs and distributes the braking force to ensure optimal deceleration, constantly assessing the road condition and available traction in the process. If that wasn’t enough, it’s also linked to the electronic semi-active suspension, and “as well as assisting and regulating front and rear braking forces, it also adjusts front and rear suspension damping to maintain chassis stability.”

All of these features require some pretty significant interfacing with the rider, so Yamaha has thrown in a new TFT display that’s even larger than what you get on the Tracer 7, at 7.0-inches. Built-in satnav is available to those who want it, by virtue of a Garmin subscription. And as you’d expect, Bluetooth smartphone connectivity is also part of the package.

The biggest news as far as the Niken three-wheeler is concerned is in the engine department, where the new 890cc inline-triple marks a near-5 percent increase from the previous 847cc unit. Radiator capacity has been bumped up to handle the increased heat output from the larger motor, and the entire engine has been rotated 5 degrees forward for optimal chassis balance. While Yamaha hasn’t yet revealed new output figures, it’s safe to assume that there will be an increase. For reference, this same 890cc engine in the Tracer 9 produces 115hp and 90.7Nm, while the outgoing 847cc Niken GT manages 115hp and 87.5Nm.

Another change is the introduction of ride-by-wire, and along with the new engine come new ride modes: Sport, Street, and Rain (which decreases output by 18 percent). Other smaller updates include changes to the adjustable windscreen, tweaks to the seats and revisions to the 7.0-inch TFT display.